Book Review: Reasons for Naturalizing the Jews in Great Britain and Ireland by John Toland (1714)

"a work that might well be described as revolutionary"

Rodion Romanovich Raskolnikov maintained that, from a historical point of view, we can distinguish two types of men: the ordinary (i.e. one whose sole mission in life would be to procreate and maintain the species numerically) and the extra-ordinary – i.e. those distinguished by the fact that, going beyond the established rules and tradition, they pronounce a new word in their medium, thereby marking a turning point in the advancement of humanity.

The truth of Raskolnikov's theory can be seen in any creative field – e.g. philosophy, whose historical development has been shaped by a series of extraordinary individuals. Now, what is the criterion to discern whether these 'exceptional men' are actually liberators of the spirit and improvers of humanity? The answer to this question is provided by the work of John Toland (1670-1722) in his Reasons for Naturalizing the Jews in Great Britain and Ireland, On the Same Foot with All Other Nations, written and published in 1714.

The purpose of Toland's essay is to publicly denounce the status of Jews in English society since the revolution of Cromwell, in order to vindicate the recognition of their rights and that they be granted full citizenship, in the same way as had already been done with all established Protestant sects in both Britain and Ireland. 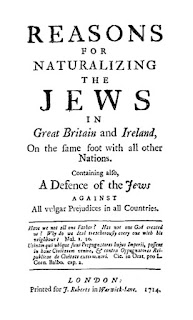 This defence of the Jews is based on Toland's theory, according to which, every member of a community must participate actively in politics, in order to help improve and make more free the country in which they live. While compliance with the law is essential in any human society, it should not, however, be blind acquiescence. Rather, each free and independent citizen has the responsibility and duty to criticise and propose other laws, which may conform better with the good and happiness of the whole nation.

For this reason, the vindication of the Jewish people carried out in this work is not done with the intention of being 'populist' but, with the sincere belief that one "may serve my Country: and I am inexpressibly pleas'd, that the most effectual way to do so, is the promoting of Humanity, and the doing good to all Mankind."

The reasons upon which Toland argues for naturalisation with full right for the Jews in Britain and Ireland fall into three categories: religious, economic and political.

Firstly, Toland reminds us, in his Dedication, that it is through the Jews that Europeans profess Christianity because, "by them, you are undeniably come to the knowledge of one God, from them you have received the holy Scriptures, of them is descended Moses and the Prophets, with Jesus and all the Apostles."

As regards economics, Toland argued that the presence of Jews in a given territory has always been synonymous with wealth and prosperity, presenting as counter-examples the precarious fate of Spain and Portugal after their expulsion. In this context, Toland echoes xenophobic prejudices of the common people, who claim that foreigners 'take bread out of their mouths', arguing that the fact that more people engaged in the same activities facilitates not only the increase in goods and services but also competition, thereby promoting improved supply and above all, the lowering of retail prices. This is what Toland called the "Rule of More, and Better and Cheaper."

On the other hand, the Irish philosopher decisively combats the prejudice that Jews are exclusively devoted to trade and usury, exposing a series of empirical data that demonstrate their excellence in other areas and indicating that, if the Jews are characterised by their financial work, it is only because throughout history they have not been allowed to perform any other activity.

Next, Toland denounces all historical persecution and accusations that have been carried out against the Jews (cf. p. 20-24), highlighting how they were rooted in superstitions and in prejudices introduced by priests, especially when they were allowed to participate in and decide on policy. Toland graphically defined the situation when, relying on another defender of the rights of the Jews, the Italian Simon Luzzatto, he classifies the historical enemies of the Jewish people as follows:


"These are first the zealots, under whom may be listed Priests and Hypocrites; secondly Politicians, comprehending corrupt States-men, and drivers of private Interest; and thirdly the vulgar, who, under colour of religion or the public good, are acted, animated, and deluded by the other two, the better to serve their own sinister purposes."


The consequences of hatred of the Jews can be observed, not only in societies that have expelled them from their midst but also, in those in which they live to enjoy certain freedoms, such as Turkey or Poland. Thus, according to Toland, in these countries, although the Jews have properties and schools, "yet they are treated little better than Dogs in the first place, and are often expos'd in the last to unspeakable Calamities."

Once the traditional prejudices against the Jews have been confronted and rejected, Toland justifies their necessary naturalisation, arguing that, unlike other groups, Jews would not get mixed up in political or religious issues and would support "Liberty of Conscience" putting them on the same side as "Liberty and the Constitution". Moreover, the Jews would never betray their host country by obeying a foreign authority or fighting for another country, since they don't have one and so, their faithfulness would be guaranteed and they would work for peace and social cohesion.

Despite the economic and socio-political advantages of naturalisation of the Jews in Britain and Ireland, Toland is aware that his proposal to end the "strange stories of the danger of Judaizing" will not be welcome within certain sections of society. However, he knows that he has done the right thing, as a member of a community and above all, as a philosopher:


"I own that thus much I thought necessary to write, for the common benefit on this uncommon subject; and if I shou'd not meet with a general applause (in which case I shall not at all be disappointed) yet I cannot but enjoy the particular satisfaction of having dischaged what I believ'd to be my duty: since with all wise and honest men, Humanity and good Nature are sure to atone for any defect in my Politics."


With these words, Toland ends a work that might well be described as revolutionary, since it seeks to address and eliminate a historical bias which has been – and still is today – a heritage not only of the public at large but also, of the intellectuals.

The unconditional struggle against all forms of prejudice, in order to free the human spirit, is the main characteristic of the philosophy of John Toland; a feature that distinguishes him from the vast majority of currently considered great philosophers and provides the key to understanding why he is a virtually forgotten thinker.

This review has been translated from the Spanish original, which was first published in Daímon. Revista Internacional de Filosofía, nº 59, 2013. We are grateful to the author for sharing his insight and allowing us to reproduce this article.

Reasons for Naturalizing the Jews in Great Britain and Ireland, On the Same Foot with All Other Nations by John Toland (1670-1722) was first published in 1714 and has been available over the years in various facsimile editions. It was re-published in a modern, annotated edition in 2012 by The Manuscript Publisher and is available to buy online, in print and e-book (Kindle) editions.